Sustainability is a hot topic in the last decades, as agro-industrial production growth led to a marked degradation of natural resources and environmental changes. This “development” completely disagrees with the concept of “Sustainable development” reported in the Bruntland Report (1987): “Sustainable development is development that meets the needs of the present without compromising the ability of future generations to meet their own needs”.

Considering the massive growth of the World population in the next years and the consequent rising of food demand, sustainability concept needs to be applied even in animal nutrition, main input of the production of food of animal origin. Nowadays FAO and scientific community are more and more focused in sustainable animal nutrition, concept elucidated by Makkar (2012), that implemented the canonical “three pillars" of sustainability: Profit, People and Planet, with Ethics (Fig. 1). 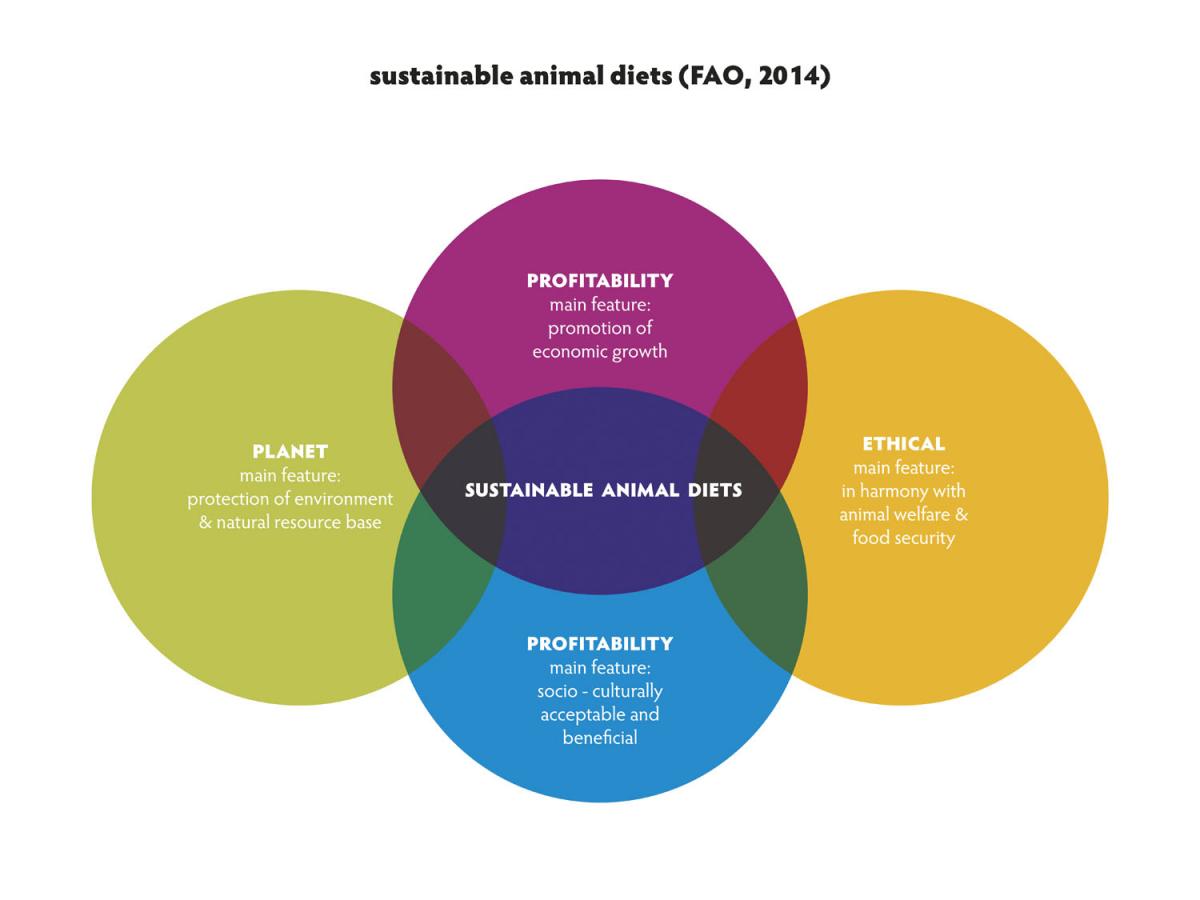 As stated by the FAO report “Towards a concept of Sustainable Animal Diets” (2014), current livestock production systems demand high energy, land, chemicals and water, all of which are increasingly becoming scarce, therefore It is unlikely that the growth rates of the past could be sustained in the future due to increasing costs of energy, grains and other inputs. The above paper reports the results of a survey that involved nearly 1200 worldwide stakeholders, ranging from academics and GNO’s representatives to consultants and technicians of the feed industry, asked to identify the most important topics within each of the pillars of sustainable animal nutrition.

For the “Planet” pillar, the most important elements were: minimize water pollution; not lead to deforestation and land degradation; minimize air pollution and preferably use locally available feed resources. Therefore, from the environmental point of view, limiting pollution, preserving the environment and limit the cost linked with transport are considered the most important aims.

From “People” side, stakeholders rated, in order of importance: affordability of the consumers, promotion and preservation of local knowledge, avoid competition with human food and exacerbation of unfavorable legal processes, such as land grabbing.

For the “Profit” dimension, the highest importance was given to the need to consider socio-environmental costs to the true cost of production, which was followed by enhancing benefit:cost ratio for all stakeholders from the livestock sector, and not enhancing volatility in price of feed ingredients.

Outside of the 3-P concept, towards ethical aspect, animal nutrition should ensure animal welfare and food safety. Moreover, feed efficiency is another key point to improve sustainability, indeed the higher is the efficiency, the lower is the input need and the feed waste. The goal can be achieved by feeding a balanced diet, that meets the nutritional demand and maximize production performance.

Basically, taken together the above outcomes, animal nutrition should be based on raw materials that can maximize feed efficiency and reducing production cost, without competing with human nutrition, degrading natural ecosystems and limiting pollution.

In this scenario, as reported even by FAO, the exploitation of industrial coproduct is crucial, as they can meet most of the features considered fundamental by the stakeholders for the goal of a sustainable animal nutrition. Product such as Second-Generation Single Cell Protein can ensure feed safety, as the come from feed and food additive production process and high feed efficiency thanks to the lack of toxins and antinutritional factors. From the environmental point of view, they limit inefficiency in feed and food additive production, as represent a coproduct of industrial production, and, moreover, its inclusion in place of animal and vegetable protein sources can concur to limit depletion of fish stocks (e.g. to produce fish meal), land grabbing and deforestation (e.g. to produce soy). Nowadays, food production suffers the competition with feed, fuel and fiber and this is one of the main critical point for sustainability. Limit the competition will be one of the main goals, taking into account that the ratio between population and available arable land is going to become lower and lower due to the land exploitation and the population growth (Fig. 2).

Together with these environmental benefits 2ndgeneration single cell protein can lead to reduce raw material cost’s volatility and overall feed cost without impact of production performance, thanks to their stable and affordable price compared to other protein sources. 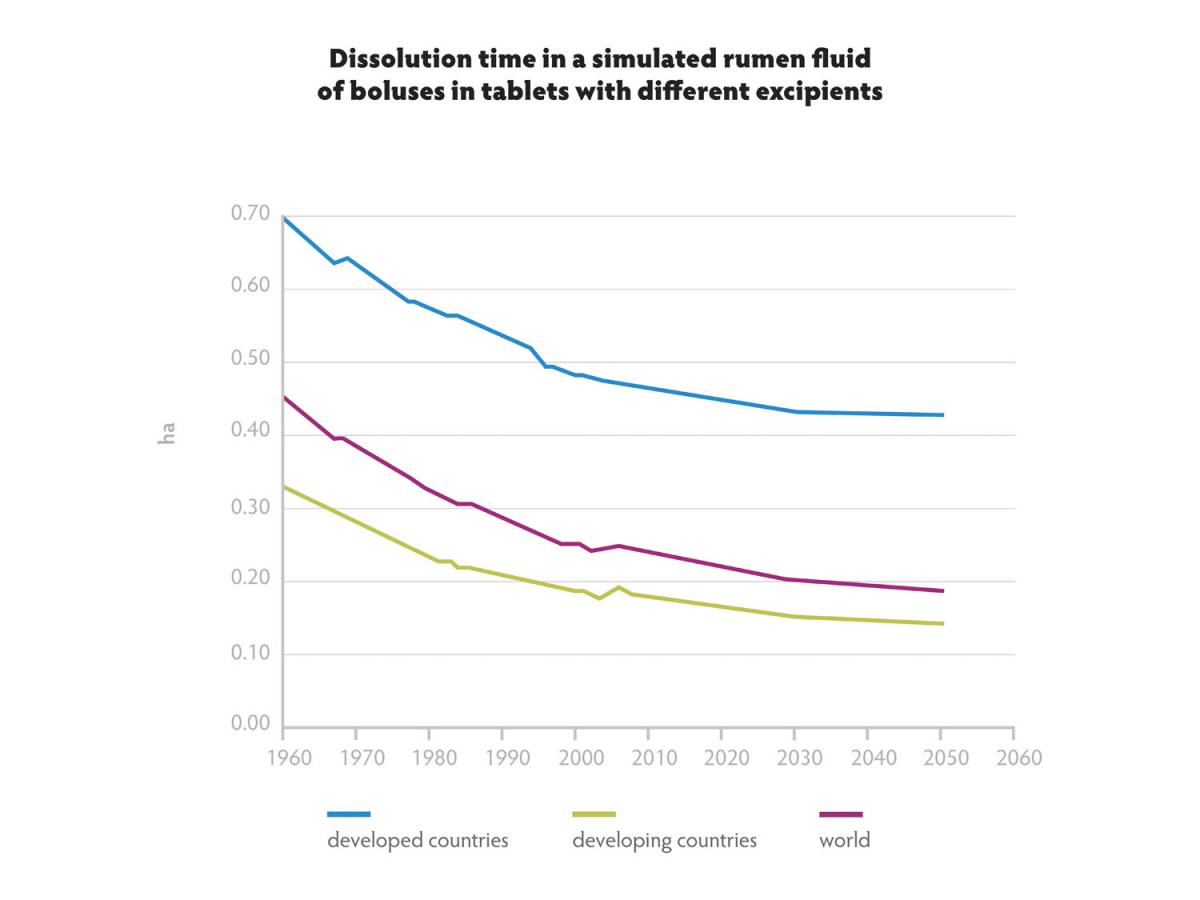 In terms of sustainability of industrial feed production, the utilization of renewable energy sources is crucial. For special feed and premix production, Mazzoleni is using 100% solar energy, therefore covering with 100% natural sources one of the main energy inputs.

Mazzoleni and Cesvi in the name of international solidarity

New Portfolio organization of Aminopro, the Second Generation of SCP

Evocal - Calcium for your fresh cow

AminoPro™ 75 - Stability is the key

A proper drench for an easy start

Work in progress at cappella cantone to expand our production plant

Yeast Cell Wall, benefits for all

An innovation in cubicles’ hygiene

Calves, lambs and kids: the future of the farm